One of my close friends had a baby shower-slash-potluck over the weekend. I initially planned on buying a tray of sandwiches or a couple of large pizzas for the party but my other friend coordinating the get-together insisted that I prepare a homemade dish, even going as far as delegating Pancit malabon as my dish to bring.

Pancit Malabon is a popular fiesta fare which originated from Malabon city (hence the name) and its ingredients reflect the abundant coastal harvests of the area. The orange-hued sauce of this noodle dish draws flavor and color from shrimp juice and crab fat. The toppings may include crushed pork cracklings, chopped napa cabbage, flaked tinapa and a rich array of seafood such as shrimp, oysters, squid, clams and mussels. As you can see, I kept it simple and used only shrimp but feel free to add other shellfish as preferred. 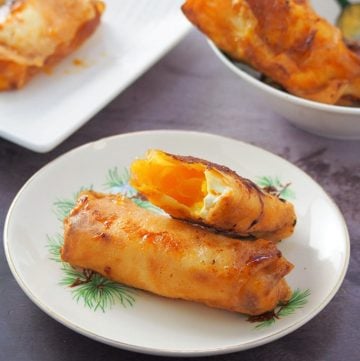