If you regularly use the internet as resource for recipes, it would be safe to assume you're already familiar with Connie Veneracion, the sassy lawyer behind the wildly popular Casa Veneracion. I have been a follower of her blog even back when I didn't know what a blog was. In late 2005, I stumbled upon her site in search of how to make yema balls and it has since become a regular read of mine. Her teeming arsenal keeps me glued for hours, deeply absorbed in her fascinating stories of family, home, and travels. But although she writes about a variety of subjects, I come mostly for the food. Her site has hundreds of recipes, from favorite classics to outside-the-box meal ideas.

If there was a catalyst, an event that precipitated my decision to start food blogging, I have to say it was in 2007 when Connie posted her daughters' school lunch for the day. Not only did the bangus a la pobre packed in plastic containers had me salivating, it also had me considering a blog of my own. How cool it would be, I thought, to have a virtual place I can "store" my recipes and at the same time, document my family's everyday memories. A few weeks after, I had a website up and running. No, it was not Kawaling Pinoy but that's another story for another day. 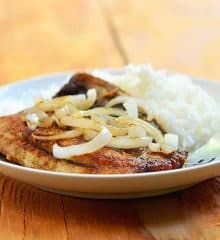